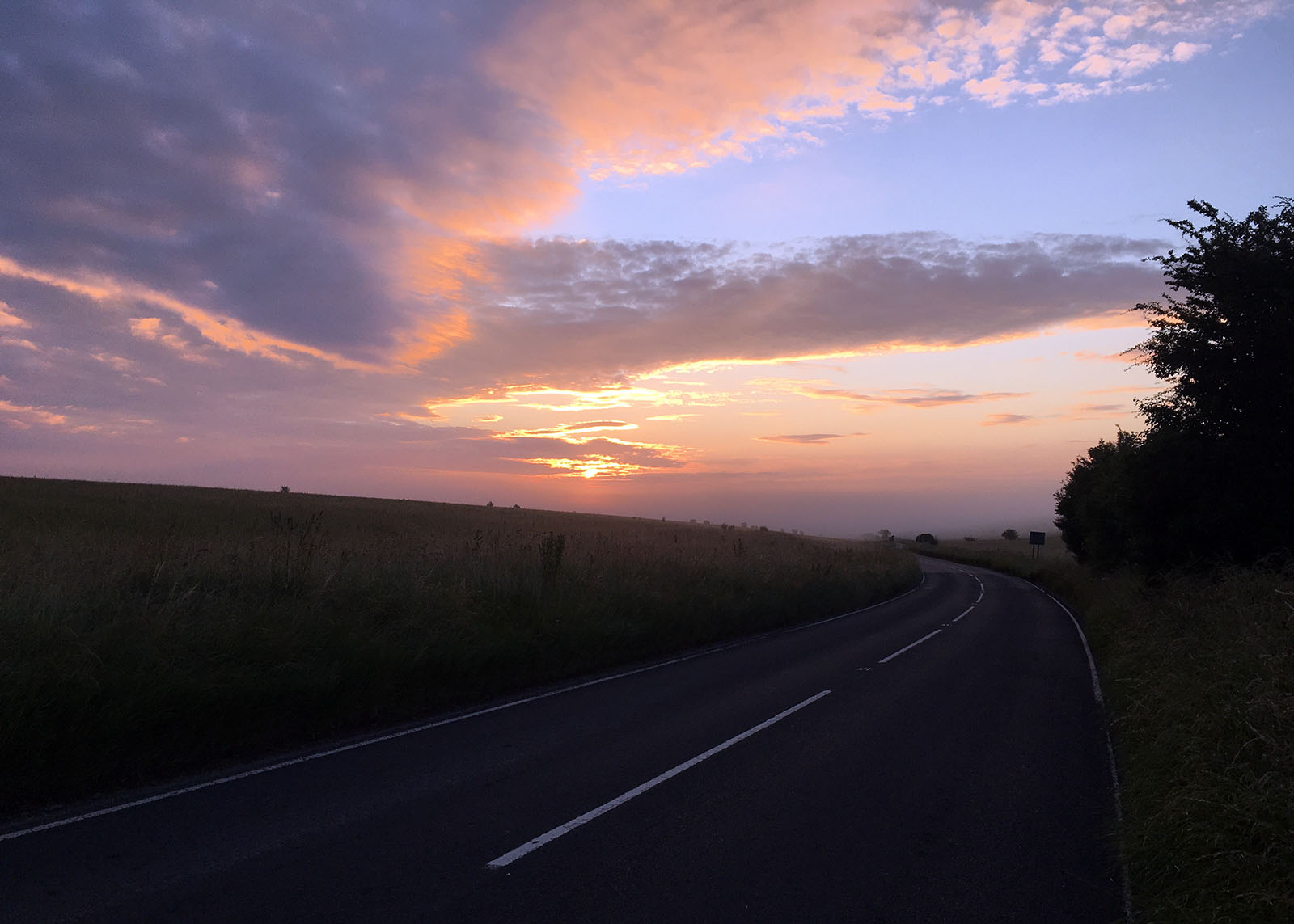 With limited opportunities for racing this year I set my sights on long distance and decided I would complete a Super Randonneur Series (SRS), a set of audax rides that requires you to ride 200km, 300km, 400km and 600km (or more) within the audax calendar season. Some of the bigger events like Paris-Brest-Paris require you to complete an SRS in order to qualify.

My club Kingston Wheelers runs a whole series of audax events, including a new 1000km ride to Land’s End and back (LLEL). I signed up earlier in the year and hadn’t really spent much time thinking about it, just knowing that I would need to finish my new bike build with compact gearing and disc brakes to tackle the steep climbs and descents.

The bike build came down to the wire and the new steed was only ready the week before and I spent the day before taping the frame to avoid the bags rubbing and wrapping the handlebars. I would have ideally done a big ride prior to the event to test it properly, but after a 30km spin it felt pretty good.

Unfortunately my friend Craig had to pull out ahead of the event with knee issues, which meant I would likely be riding a large part of it solo. But on the plus side it meant I had the room to myself at the hotels we had booked at Truro and Exeter.

The ride start clashed with the Euro semi final between England and Denmark, so I decided to start late and try to watch the match, but in reality spent most of the time on last minute faffing and adding bits of kit. By the time I got to Raynes Park at 10.20pm I discovered most people had started at 9pm. Immediately regretted not going early and missing the draft of the group for the night ride.

As I rolled out I felt pretty nervous about what lay ahead riding through the night. I’d timed it badly with the football as all the drunk football fans were now pouring out of the pubs and heckling strange people in lycra cycling into the night. Beyond Woking it quietened down and then I hit the A31, which apart from a few lorries was pretty deserted and I got in the aero bars for a quick blast down to Winchester after four hours riding.

After Winchester we hit some small winding lanes, and as I was starting to feel sleepy in the early hours I was happy to bump into my clubmate Robert and we shared ride stories and our plans for the miles ahead.

My back was starting to spasm and by the next control at Amesbury just 150km in I thought there was no way I would be able to finish the ride carrying this pain. I’ve had pain before on long rides, but never so early into the ride so I must have still been recovering from the 400km ride from just 10 days before.

I ploughed on to Castle Cary at 200km, where I knew I could get the train back to London if needed. I stopped at a Co-op to get some Nurofen and a big group of riders sailed past whilst I was stopped. Knocking back a couple of tablets seemed to help and I carried on to the nearby village of Keinton Mandeville to stop at some friend’s house for coffee. This cost me about an hour, but lifted my spirits and I decided to carry onto Cornwall.

The next control at the pretty Somerset village of Langport came shortly after and I stopped for a pretty epic bacon sandwich at The Little Bakery, which really sorted me out and the sun was out so I stripped down to jersey and shorts feeling confident about eating up the miles ahead.

The run to Exeter over the Blackdown Hills was pretty lumpy and I could see my average speed going south. 25km from Exeter I hit a closed road on the route due to roadworks which I wasted 30 minutes diverting around – I later discovered that everyone else had just been waved through!

I made it to Exeter by 2pm, after 15 and half hours riding. By this point it was clear that I wouldn’t make it to Land’s End by sunset as originally planned, but I had a place booked at Truro as a fall back.

Immediately after leaving the city I hit a killer hill and that set the tone for the rest of the ride to St Austell. Just over 10km out of Exeter I hit Dunsford and the edge of Dartmoor National Park, which brought more hills and the highest point of the ride Higher White Tor. I bumped into clubmate Kevin on a fairly hefty hill and we carried on riding together for most of the rest of the day. Black clouds were looming and it started to lash it down, with the temperature dropping pretty low for July. Had several “WTF am I doing?” moments at this point of the ride.

With Dartmoor dispatched we hit the village of Gunnislake, which signalled our arrival in Cornwall. More crazy hills followed with a lot of traffic, and it felt like we had arrived at rush hour as we battled with cars and close passes. At least the rain had eased off though by this point.

The next few hours were absolutely dragging by and I was really feeling the sleep deprivation. At this point I had decided to throw in the towel and get the train back tomorrow after a massive breakfast at the B&B..

Arrived at St Austell at 8pm where most people had booked in at the Travelodge, however I still had another hilly 20km to ride to Truro, which I reached at 9.30pm and after a quick spin around the town centre with its magnificent cathedral I checked in at my B&B on the edge of town, where I ordered a chinese takeaway – 24 hours riding and 460km in the bank.

Woke up at 7am with all the lights on after passing out like a stone. Bit later than I would have liked but felt very refreshed and since there was no breakfast at the B&B anyway I decided to carry on and complete the ride. I’d come this far and after seeing train prices back to London, decided to just keep pedalling.

Beautiful little lanes after Truro and arrived at the Land’s End control, The Apple Tree Cafe, in the rain but in good spirits by Thursday lunchtime. Had a chat with a few people at the control and carried onto the coast for a customary tourist shot.

The next major stop was Newquay and the traffic was a nightmare, seemingly concentrated within that part of Cornwall. Had a massive fish and chips washed down with a Peroni on the main strip, which helped satisfy my ever-growing calorie deficit.

Following Newquay the route took the Atlantic Highway, which was busy but fast and made good use of the aero bars all the way to Launceston. The rest of the ride was beautifully quiet and I bumped into seasoned audaxer John for the final 15 or so kilometres into Exeter. Arriving at the Travelodge at 10pm after 48 hours riding and 730km ticked off.

Had a bit of a nightmare at the Travelodge, when I went to check in as Craig had booked for the night prior and all rooms were now taken. Nearly cried at the desk, but then went and charged my phone in the corridor and found another room at the holiday Inn down the road – expensive f*ck up but at least I had a bed for the night and a room to charge up my kit. Got a pretty awesome pizza and beer from the hotel bar, and went to bed around midnight ready for an early start tomorrow.

Hit the road at 6.30am (later than planned again) in pretty heavy drizzle and legs feeling totally empty. Was a pretty miserable couple of hours plodding out of town, knowing I still had 300km to get through.

On this part of the route we were retracing our steps through Somerset and back to Langport by mid-morning, where I went back to the original bakery that saved the day for me and got another bacon sarnie and tasty cappuccino.

The rain was easing off again and my spirits lifted knowing that 80% of the ride was now down, just 200km to go. I was still having issues with back/neck pain, but popping painkillers to keep it in check.

Had a very quick stop in Salisbury at 150km to go and  spent the next couple of hours in the aero bars to get to Whitchurch as quickly as possible and just in time for a double espresso at the kudos cafe.

With the sun out the final 100km on home roads flashed by and after a quick stop at a petrol station in Ascot to buy nuts, thinking of something to go with the beer ahead, I zipped home to Raynes Park in the fading evening light, making it back to control at 9pm on the dot. 71 hours riding and 1,045km on the Wahoo.

A tough ride no doubt, epic and awful in equal measure. The back pain added another level of suffering, which made me doubt whether I could finish many times, but I’m happy to have made it through and completed the super randonneur series.

I learned lots of lessons about kit and testing your setup in advance of the ride. Did some silly things such as carrying a GoPro with no battery (it turned on in my bag), a camera with a full memory card, and bivvy kit that I didn’t end up using. In hindsight I would have carried a second battery pack, which would have saved me paying the extra hotel room so I could camp out.

Clothing-wise was pretty much spot on, and I was happy to have a decent Albion rain jacket, leg warmers, long finger gloves and a thermal gilet for the night ride. I did however forget overshoes and my new shoes have turned a tea stain coloured from all the wet farm tracks. It’s worth packing for all conditions despite what BBC Weather says. Also recommend packing spare bibs and socks, so you can wash (and dry on the bike) and wear in rotation. Saves getting saddle sores and trench foot

The bike setup was pretty awesome, I lovedthe Cinelli Semper build and the Arkane wheels felt solid but rolled nicely across the hills. I was happy to be running Conti 4 Seasons as the lanes were pretty muddy and full gravel, and I managed to stay puncture-free.

Big thanks to Rich Evans and the Kingston Wheelers Audax Chapter for the impeccable organisation and warm welcome at the finish. A keg of beer from The Park Brewery was a touch. If you fancy a big challenge this is definitely one to sign up for next year.