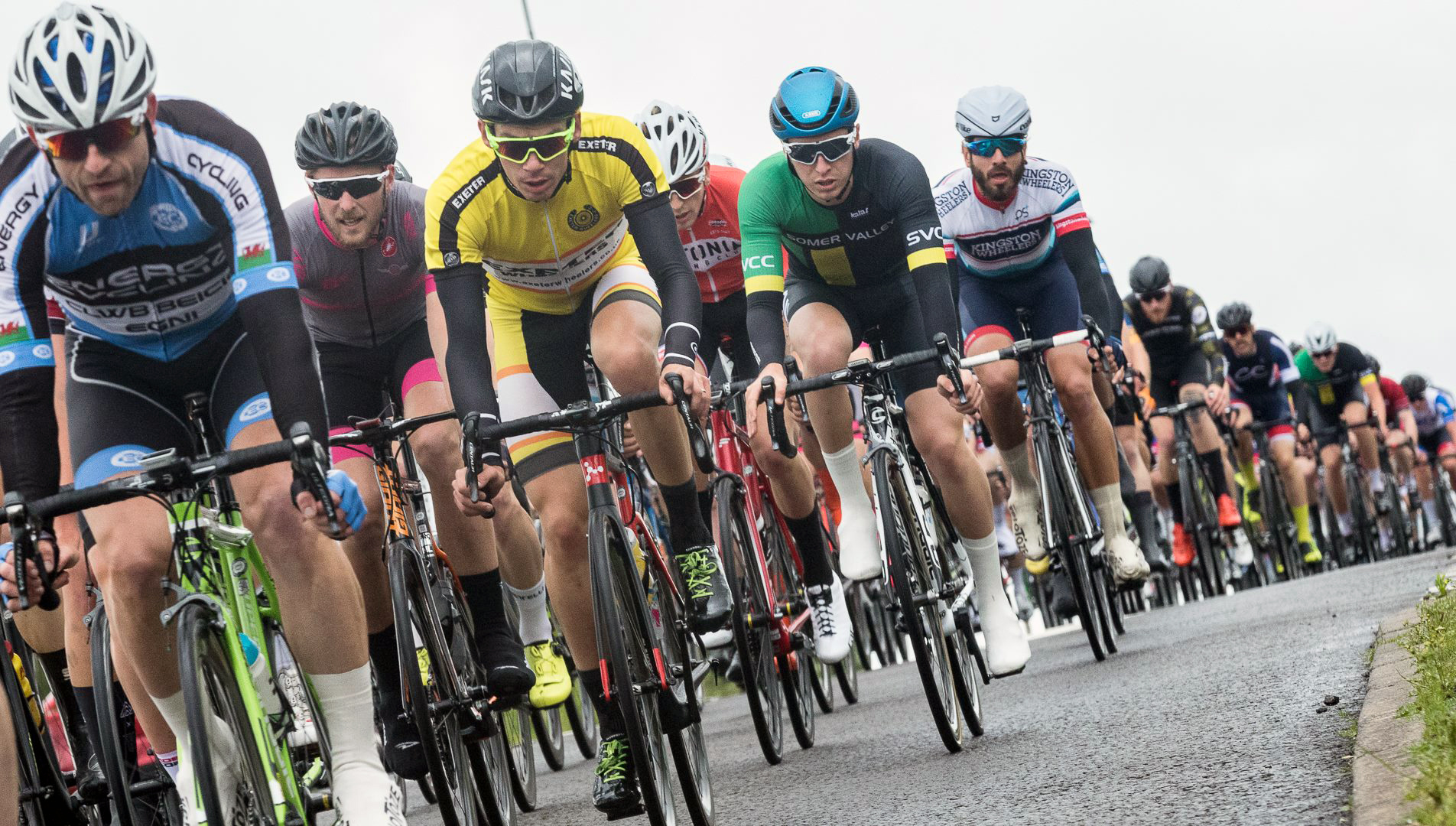 The Defonce is a two day stage race for 3rd and 4th cat riders. Going into it I been warned that just because it’s a 3/4 it shouldn’t be underestimated. Indeed there would be a lot of teams from Wales and across the south who would be fielding strong up and coming junior riders. The field consists of 20 teams, comprised of four riders, making a total peloton of 80. There were a fair few teams going from London; Kingston Wheelers, CC London, Paceline RT and Brixton CC.

Our team was comprised of myself, Rupert, Alex and Andy. Having done some training rides together we knew Andy was our strongest rider and the one with a best chance at GC. Our aim was to ride the TTT as hard as possible to put Andy in a good position for the two road stages that followed.

The first stage of the race was a team time trial on a rolling course of just over 11km in length. Last year the fastest team had recorded a time of 17 minutes, so that was a bit of a marker in the sand, however wind and weather conditions play a big factor. It was looking pretty grey and overcast and on the drive to the start there was a bit of rain, however around the TT course the roads looked pretty dry. The course runs along the A48 out of Cowbridge and back, pretty lumpy with a fairly hefty climb up Crack Hill on the way back. 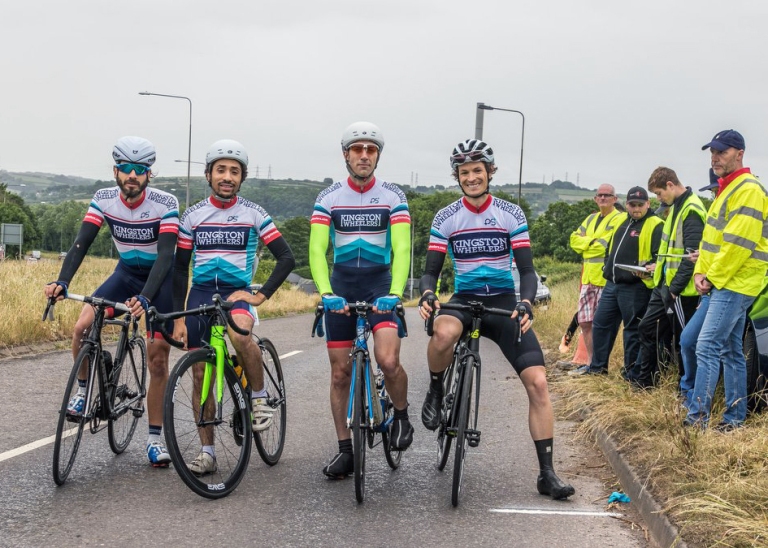 After a warm up on nearby roads we rolled up to start line and watched the team ahead roll off. We lined up at the start in a predetermined order, with Andy of first, then Rupert, Alex and myself last. With Andy doing a monster starting turn my heart rate jumped straight up to close to max. We seemed to be working well as a team and keeping pretty smooth and when my turn arrived I felt good, but tried to save some in the tank for when I would have to rejoin the back of the group.

My second turn arrived as we started the descent and I was glad of the 53T chainring to keep pushing the pace down the ascent. Andy was first wheel going into the roundabout. We weren’t very tight coming out of it, but at least we were safely through and Andy kept his turn going to take us to the foot of the climb where Rupert took over. Rupert and Alex were out of the saddle and it was starting to really hurt, but we were still keeping it tight and it was looking good. After Alex peeled off and I was back on the front I could hear a shout from behind, Alex had dropped off and we were down to three.

Knowing the worst of it was over we kept the pace ticking over, and made the turns fairly short. With 1km to go we started to wind it up and finished sprinting over the line. I was pretty happy to see that we had clocked a sub-17, potentially one of the faster times on the day. We rolled back to HQ and later on discovered that we had finished 5th fastest with 16:52, but 26 seconds down on the stage winners VC Venta.

With the TTT out of the way you could sense the team were much more relaxed. We headed back to the house for lunch and discussed tactics for the day ahead. We might try an early break if the opportunity arise, but otherwise the priority was to get Andy to the finish without losing any time to Venta or the other teams up there in GC. There was also a prime with time bonuses just 2 km into the stage, which we’d see if we could contest, but it would be a total bunfight coming so early in the stage.

We rolled out from HQ and it was neutralised until the A48, the same bit of road where’d we raced the TTT. The flag dropped and teams started to wind it up on the front. It was pretty manic and as we closed in closer to the prime, a group chipped off the front for the prime. I’m not sure if we were in contention, but it would be a lot of matches to burn at this stage. 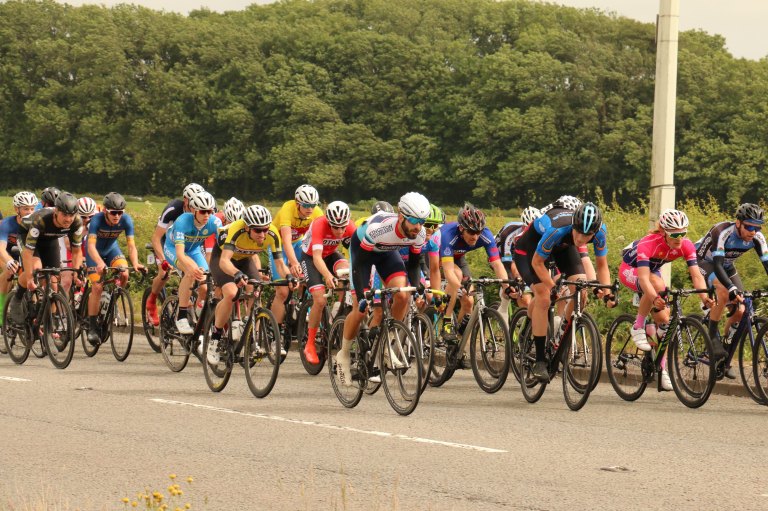 After the prime the race calmed down and the route looped through Ogmore Village and towards the coast. It was pretty sedate as we approach the climb leading to Ogmore-by-Sea and I found myself on the front, with a plan to start upping the pace. A couple of riders attacked over the top and I decided to try to go with a rider from Unknown Development. Three of a us got a slight gap, then all hell broke loose behind and the peloton upped the pace with strong rider from Venta pushing hard. We were quickly swallowed up and the peloton became one long strung out line, with gaps opening up along the coast road. After my attack, I was having to dig deep just to hold the wheel, but Andy was up front right in the mixer and looking comfortable, a good sign at this point.

Along the approach to Ogmore, Sam Andrew from Paceline snuck off the front and started opening up a gap. A brave move into the wind! The bunch were content to let him get away, until Venta put one of their guys on the front who laid down a solid turn until Sam came back into view and was caught on the final run upto the A48. At this point two riders chipped off from the bunch and started drawing away, presumably in search of the third prime. The bunch started chasing them down but they were still looking good for the prime at the top of Crack Hill, which was worth £50 on top of the points. I foolishly decided to give it a go and attacked out of the bunch but ran out of road and sat up as the two riders ahead crested the hill first. From here we took the fast decent down to the roundabout and the final climb back up Crack Hill to the finish. Early attacks started going but my legs were fried. Riders swarmed past and I was happy to see Andy go up the road with the front group and gave a shout of encouragement.

As we made our way up Crack Hill towards the finish there were several groups going the other way and I realised how attritional the race had been. Feeling pretty done in, it was a relief to see the 1 km to go sign and then roll home to the finish. Rupert rolled in shortly after me and we headed to HQ to find Andy who had finished a cracking 4th place on the stage. Unfortunately Alex had turned off early and managed to DNF himself from the race, ruling him out of Sunday’s stage. The rest of the day was spent recovering and heading to a local pub for dinner, everyone was restrained on the recovery ale.

Sunday arrived with a worsening forecast, feeling colder than the Saturday and a strong chance of rain. It started spitting as we headed to HQ for the race briefing. The comms instilled the usual fear into the riders by giving us a rundown of the steep technical descents and slippery cattle grids dotted around the course. 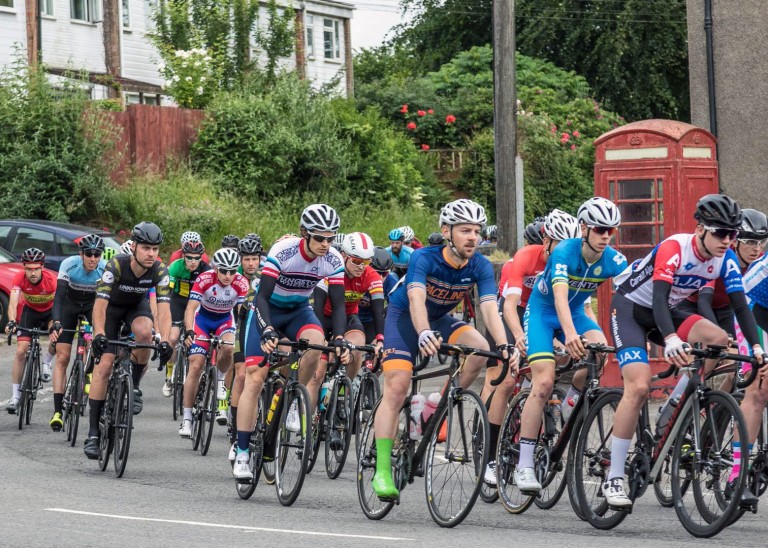 Sunday’s course was a 70 km hilly affair, with four substantial climbs coming half way through the stage. The race started fairly fast with teams jostling for position near the front. The narrow roads were making it hard to move up and I was keeping an eye on the distance to the climb and Andy’s position in the bunch. With about 5 km to the start of the climb Rupert moved Andy up the road towards the sharp end of the bunch. It was well timed as the pace really ramped up on the approach and then exploded as the climb proper started.

Andy looked comfortable as ever and sailed up the road with the big hitters as splits started opening up. I got out of the saddle to dig in but my legs told me “gruppetto!” A group of 15-20 riders disappeared up the road and soon the small groups came together to form a chasing bunch of about 30. I decided to treat the remaining 40 km as a training ride and started doing some big pulls on the front and we soon had 5 or 6 riders on rotation pulling the bunch along. I continued the pressure up the climbs, trying to motivate everyone to keep pushing hard until the end of the race. 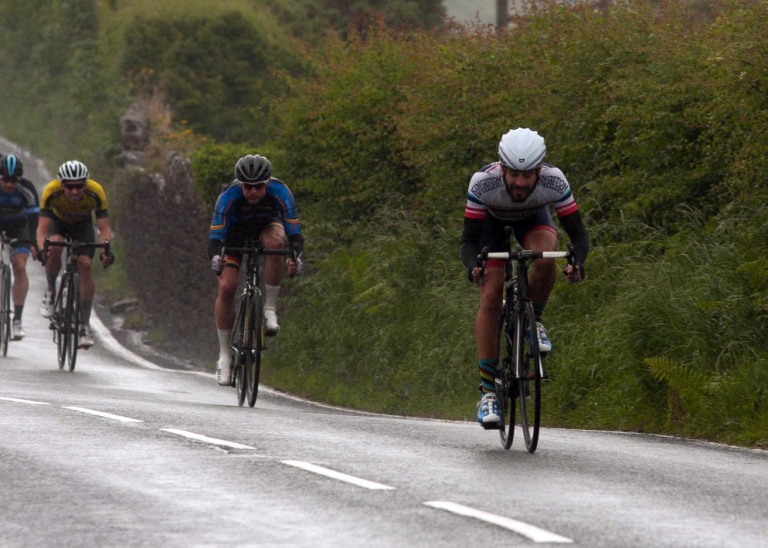 With all the climbs done, we reached the A48 for one last time for the final run in to the line. Of course everyone who had been sat in the wheels in the gruppetto started attacking out of the bunch, looking to move up the ranking in the GC. I’ve never been one to sprint for 30th place so I was content to roll home nice and easy… not that my legs would have offered much more.

Back at HQ we caught up with Andy who had come in 5th, a couple of minutes down on group of four who had escaped up the road and contained all the GC favourites. This had earned Andy 6th overall on GC and enough points to move up to 2nd cat. Chapeau!

Big thanks to the Cardiff 100 Miles Road Cycling Club for hosting the race. The rolling courses and primes on the stages made for exciting racing and on the whole the riding standard was pretty high. Definitely a great stage race to try if you fancy something different to your local circuit races.